One of the great things about being an artist is the ability to also be a storyteller! In history many an artist was used to record facts, whether in day to day life or the natural world. We still rely often on these images to tell us what life was like during those time periods, where few written records may still exist.

While many written accounts may exist today, and likely will into the future as well, this does not stop an artist from telling a story, and in fact most people find images that tell a story to be more engaging than a standard portrait. While a camera may capture the moment in front of us, the artist can capture it in a way that exists only in their head. We can tell you a story about interaction, behavior, mood, and expressions. We posses the ability to adjust the lighting of a scene to be more dramatic, or add elements to the scene that lead your eye through an image in a certain way. We can perfect imperfections (though sometimes the imperfections add interest), remove distracting elements, or transport you to a place you may never see or go.  I am not often impressed by someone who is simply a human photo-copier.  What I like is a good storyteller!!

Plain and simple - most wildlife artists use photos for their work. We use them to tell us information about the proportions of the animals, how their muscles and body work, other details about that species, and sometimes the pose of the animal. As an artist progresses beyond trying to simply copy a photo you get to add artistic vision to the storyline. I often get asked ‘where I get my photos’ that I work from as they are so captivating. Well… the images come from a variety of places from the wild to zoos… but often the storyline I create is many photos that I use to create MY vision. I have an entire portion of photos on my computer that are background elements (trees, logs, grasses, clouds, rocks, etc. in a wide variety of light sources from side lighting to overcast light) and have no animals at all!

While I do a lot of close up pieces, I am more and more often finding myself desiring to convey more than just a simple portrait. In piece like “The Naturalist” the wolf had an attentive expression in my primary reference photo, but it was up to me about what he was looking at. There was no obvious focus for him in my reference image. There were no flowers or butterfly. Once I decided it was to be an insect I got to choose which insect. I played with the concept of a caterpillar on its hind legs reaching toward the wolf. It would have worked and even been pretty cute, but I didn't have an image that was really what I wanted so I chose to go with a butterfly instead. However, as a nature artist you can’t go with just any old butterfly so then research comes into play. What butterflies would be found in the same native range as the wolf?? The painted lady butterfly that I included was one that I photographed here in Colorado, however it can be found throughout the entire US including areas where wolves can also be found.  even in straight portraits you can add interest by using dramatic lighting or choosing unique but strong, compositions.,

I have seen work on the web and in galleries that is painted in such a style that you would think that you are looking at a photograph.  While this can be quite impressive from a technical side (to go "Wow... can you believe that is a painting") sometimes I wonder WHY that person chose to paint that image or scene... because to me it wouldn't have been all that good of a photo, let alone a painting that they often spent between 200-400 hours working on!  Just because you CAN paint in every leaf and blade of grass, doesn't always mean that you SHOULD!  As an artist it is just as important to decide what to leave out, as it is to decide what to add.  Does the element you are putting in your work add to the story of the image or does it detract?

Photoshop is my friend. I use it extensively to compose my layouts and see how they will work. I also use them to create composites with the multiple images I am planning on using. I adjust contrast, dodge and burn, try out a variety of trees or brush in the background, crop in various ways and so on. Much like drawing thumbnail sketches… I create Photoshop layouts to explore compositions.

The primary wolf photo in “Edge of Darkness” was actually taken at about 10 AM. There was still nice side lighting, but through my vision I was able to enhance the light source, deepen the shadows and create the edgy mood that I have in the piece. The background was created from additional photos with similar lighting. I used Photoshop to lay it out, add the trees, play with the rocks, and play with the lighting until I was pleased with the composition and the quality of light.

So while sometimes I do take and use ‘the perfect photo’ for my art, this is the exception rather than the rule.


Here are a few tiger cub photos from a recent zoo trip that are the type that alone are not perfect, but with the addition of other elements can make some captivating artwork and let me tell a more engaging story!
1. What is the cub looking at in the water. A bullfrog? A fish? Both would add visual interest and tell more of a story than the photo alone. What types of frogs/fish live in the same range as a Siberian Tiger?  I would likely remove or at least shrink the foreground rock, as it is more distracting than adding to the story. 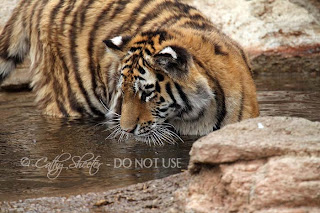 2. This cub tested the water with his paw before going all the way in. Adding snow to the background and ice to the edge of the pool would certainly let the viewer understand his hesitant expression better and allow the cub to stand out from the rocks more. Also the addition of more water drops coming off of the raised paw could add drama. 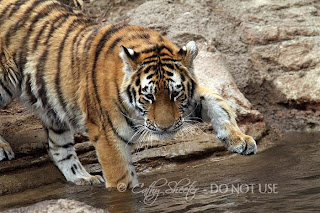 3. While you can’t see the eyes on any of these cubs the fact that all three seem to be looking intently at something allows me to decide what it might be. The composition would be strengthened by creating more room underneath them. 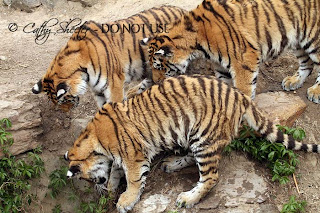 4. What has captured this cubs attention? Birds, another cub, an insect? His expression and the HUGE paws are lots of fun… but I can create even more of a story with additional elements.  I would likely crop this image and put the cub far to the left and leave more room to the right (perhaps even extending it out). 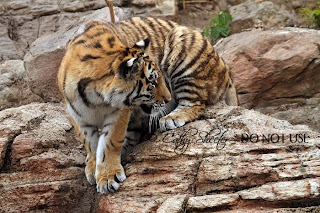 So before you delete a photo because it isn't perfect... think about what you can add to the image to make it complete and to truly tell a story!
Posted by Cathy Sheeter

Cathy, EXCELLENT PIECE! You have put into one blog entry what I have tried for YEARS to explain to my students! BRAVO!!! -Bill Muck-

Kathy, this entry shows your high level of creativity and ability to share and teach. With each photo my mind started to develop what could be the story!So your post worked!! Thank you.

What a great blog Kathy. You should turn this into an article and try getting it into Wildlife Art Journal or Wildscapes Magazine. Really interesting.