A Most Successful Show Opening!

The Colorado Governor's Invitational Show and Sale opened this past Saturday.  This show is limited to Colorado artists, and you must be invited to get in.  You can also submit your work for their consideration, which is what I did and I was lucky and got in.  It was my first year in the show (obviously) and other than being told that sales had been pretty good last year I had no previous experience with the show to go off of.

Since it was my first year I had to take in six pieces and they got to choose which four pieces they would hang.  Typically they choose two smaller pieces, which go downstairs, and two larger works to hang in an upstairs gallery.  They selected my three largest pieces from me and just one smaller work - all wildlife, and they sent me home with my two horses that I had brought as the other two works. 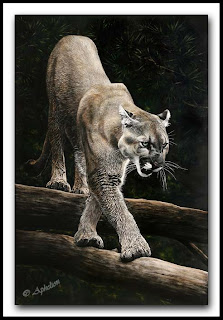 The four works that they chose were "Walking The Line", "The Brotherhood", "The Challenger" and "Patience Is A Virtue"

There was a TON of  "what the heck is that medium!??" "and How do you do it!?!" "and how long does it take to do one??!!"   So lots of talking and educating (as usual).  And people kept coming over telling me that other artists and people had told them to make sure and take a look at the scratchboard artists work!!  The sales staff was blown away as well (and if you want anyone in your corner the sales staff would be them)!  And By the time the night was over three of my four works had sold, with strong interest in the fourth as well!!

It was really fun to meet the purchasers as well.  The people that purchased "Walking The Line" kept debating which room it would go into.  The lady told me they had bought a lot of art, but my piece was the one she was most excited about EVER!

And "The Brotherhood" was purchased by a couple that had two boys that were now in college.  The whole family loved wolves and the brother wolves reminded them of their sons, especially because of the title of the work!

I am not sure who the winning buyer of "Patience" was, as it was the work that was downstairs (and I was upstairs all night), but when I went down at the end of the night to see if it had sold I was told by the sales staff that it was the most popular work down there!

Throughout the show I think about 35-40% of the work sold... so a good show all around, but I do believe I may have been one of the top sellers of the evening.

So to say it was a successful opening is a bit of an understatement I guess :)  I think it is very likely that I will be invited back next year as well.  Maybe once you do this art thing for a bit longer than I have you get used to shows where you make lots of sales, but I am not there yet in my career and every sale makes me feel like doing a happy dance still :)

So anyone care to join me in a happy dance?!?

BTW I also have an art fair in Parker, CO this weekend.  If you live in the area be sure and stop by the Southeast Christian Church off of Jordan Rd. this weekend.
Posted by Cathy Sheeter 3 comments:

Thats weird - I swear I posted an update to this piece a bit ago... but it is no where to be seen!

"Bee-Mused" is the title I have selected for the wolf pair piece.  It is finished as a black and white, but I have decided to color it, so it is not fully completed yet.  I plan for it to be shown at the 2011 Greeley Stampede Invitational Western Art Show at the end of June. 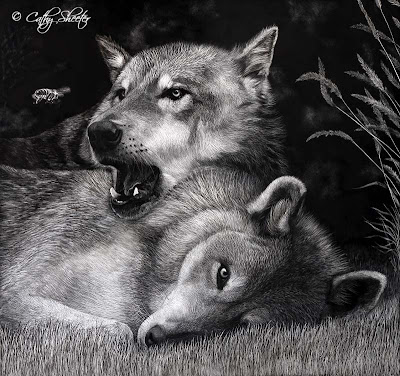 Once again I have been lapse in posting to my blog.  Well I guess on the plus you don't have to check in on it very often :D  LOL  With a very busy summer ahead of me I am sure I will not be better about posting to it, but will when I can.

I have finished one small work of a Friesian stallion.  It is an 8"x10" piece that I titled "Nobility"  Friesians are my all time favorite breed to oogle at, though with a price of $10k almost the moment they are born the chance of me owning one any time soon seems unlikely.  Oh well, I still love them!!  This stallion is named Nolke Fan De Lege Geaen and I took the reference photo in 2009. 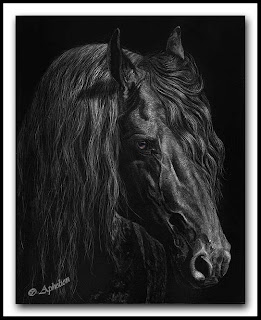 I also have recently gotten several works scanned for prints.  The new prints should be available at the end of the month.  One of them in of "Arabian Night" 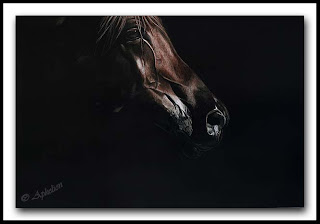 In other news things have been going well on the show front.  I have had three works (out of three) selected for the Women Artists of the West annual exhibit to be in Rockport, Texas opening in June.  I also had two works selected for the Bennington Art Center's "Art of the Animal Kingdom" also to open in June (Bennington, VT).  I presently have a tiny piece titled "All Smiles" (5"x7") exhibiting at LSU "Animals in Art" Exhibit (Baton Rouge, LA).
Posted by Cathy Sheeter 2 comments: