I am delighted to say that I have had a recent string of good luck and good sales!


At the Colorado Governor's Show opening night (April 28) I was pleased to sell two of my four works.  "Spring Loaded" went to a new collector who was very excited about this piece.  And "Bear With Me" was my most popular work with four people wanting to purchase it!

This past weekend I was in Tucson for the Settlers West Summer Show.  I was invited to show three works and all three sold making me the high volume seller of the night!  "Zen", "Leading The Team" and "A Sensitive Nature" were all well received at the show and went home to happy purchasers (I met two of the three buyers).  I am delighted to see my work (and scratchboard) being so well received at top national art shows this year!  As a result of my success I will also be exhibiting in the Settler's West Great American West Show in November.  They have requested at least one large work from me, so I will get going on that soon!

While in Arizona I also did a demonstration on scratchboard at the Sonoran Desert Museum.  It was well attended and well received.  It looks like I will be headed back there in the coming months (fall or next spring) for a full workshop on scratchboard.  What an honor to have this prestigious location host me for a workshop!

My next upcoming events will be:
Art Marketplace - May 25-27 - An art fair in Estes Park, CO

I have also sold "Feeling Inclined" and just recently found out that it has also been selected for the Society of Animal Artists "Art and the Animal" Exhibition, which will open at Bennington Center for the Arts in September. 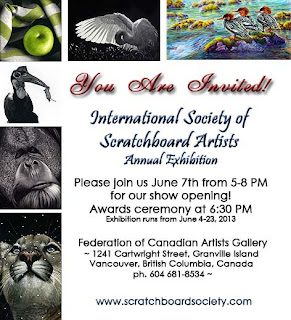